Effects of incorrectly disposed of problem substances on health

We have to deal with them every day, whether in our daily lives or at work: problem substances. Precisely because we encounter them every day, we usually give little thought to their disposal.

But what happens when problematic substances are disposed of incorrectly?? What effects does this have on the environment and on humans?? And what do we actually mean by problem substances??

Problem materials – Which wastes belong to it?

Problem substances are wastes that cannot be disposed of with household waste due to their toxic contents. They contain numerous substances that endanger the environment and health, such as heavy metals or solvents.

The list of problem substances is longer than most might think. Not all of us have to deal with all problematic substances in the same way, but almost all of us have encountered accumulators, batteries, energy-saving lamps, gasoline, adhesives or pharmaceuticals in our everyday lives.

Due to ignorance – or even convenience – the remains of these problematic substances are often disposed of in the normal household waste or even in the toilet.

Few people realize what far-reaching consequences this can have not only for the environment, but ultimately for people as well.

Drug residues in the water

Here in Germany, there are generally high safety and health standards, which ensure that the average German can live a relatively healthy life and usually live to a very old age.

Due to the wide variety of foods available in domestic supermarkets, we always have access to fresh and healthy foods.

And also the quality of drinking water here in Germany is so good that we can drink tap water without hesitation.

A circumstance that is not as self-evident as many assume, because after all, around three billion people worldwide have no access to clean drinking water.

Despite all precautions, it cannot be prevented that, for example, residues of medicines get into soils and water bodies via human excretions with the wastewater through the sewage treatment plants. Pharmaceuticals make up the main part of the altered wastewater.

Here, the individual has little opportunity to change anything. However, we should reconsider how we want to dispose of old medicines in the future. Because they are still too often simply flushed down the toilet.

According to a 2008 study, one in seven citizens dumps their unused tablets down the toilet at least occasionally, and almost one in two does so with liquid medicines. The result: wastewater becomes more and more polluted.

Although wastewater is treated in wastewater treatment plants, the three-stage plants in Germany are not yet equipped to handle the new problem substances.

A fourth treatment stage based on ozone, activated carbon or with special membranes would be necessary to filter the pharmaceuticals out of the wastewater. The problem, however, is that this fourth stage of treatment requires more energy and is also more costly.

As long as a fourth purification stage is not implemented, the drinking water will also contain residues of medications.

While the negative effects of drug residues in water bodies and thus also in fish have been noticeable for a long time, there do not seem to be any consequential effects in humans so far, respectively. these have not yet been researched.

However, it is up to each individual not to pollute wastewater further by flushing medicines down the toilet.

If in doubt, it makes sense to ask your pharmacist or a local pollutant collection point how the medicines can best be disposed of.

This can lead to skin irritation, chemical burns and damage to the respiratory tract. Accordingly, it makes sense to use such products sparingly and to dispose of them properly.

If you want to shop in a particularly environmentally friendly way, you can look out for the European eco-label, the so-called Euroflower.

This confirms that a product – above and beyond the minimum legal requirements – pollutes the waters less and is more harmless to health.

Who would like, can clean its bath, its WC and its kitchen also with mild all-purpose cleaners, soft soap or vinegar instead of bacterial detergents.

Unsurprisingly, household chemicals must not be disposed of with residual waste or down the toilet due to their hazardous ingredients.

Instead, they must be handed over to the recycling centers of the cities and municipalities, where they are then disposed of professionally. Only empty containers may be disposed of with a clear conscience via the recycling garbage can with the green dot.

Mounting foam cans pose another problem. These are used, for example, in the insulation and sealing of joints and in the installation of windows and doors.

Professionals and amateur DIY enthusiasts who regularly work with the so-called polyurethane or. PUR foam cans, know about the side effects of the assembly foam.

While this behaves in hardened condition environmental neutrally and represents no danger, that looks already completely different with empty assembly foam tins.

The isocyanates contained in liquid form can cause allergies and respiratory problems and are suspected of causing cancer. Therefore, empty cans should also be taken to a hazardous waste collection point where they can be properly disposed of.

Almost half of them are disposed of incorrectly. This is so problematic because batteries also contain poisonous substances such as lead, cadmium or mercury.

The heavy metals can have health-damaging effects on humans. If they enter the human body via the food chain (for example, because they have been carelessly thrown into the environment and enter the groundwater), high and prolonged exposure can lead to impairment of the nervous, immune and reproductive systems.

Cadmium compounds can cause kidney damage, among other things, and are suspected of being carcinogenic when inhaled. 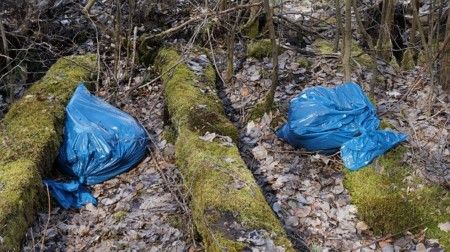 Lead can damage not only organs but also the central nervous system. Special care must be taken with leaking batteries. These should only be disposed of with gloves on.

Of course, batteries should never be disposed of with household waste, but should be taken to recycling centers. Ideally, avoid batteries altogether and use rechargeable batteries instead.

Anyone who has ever moved and had to repaint their home usually has some leftover paint. Often the question arises here: Where to put it?? Simply flushing everything down the toilet or throwing it in the residual waste for convenience is definitely the wrong solution.

If paints, varnishes or other chemicals get into the sewer system, they can form explosive or toxic gases there, endangering the safety of sewer workers and equipment.

Some ingredients of chemicals can also end up in water bodies. Liquid paint and varnish residues should instead be taken to a hazardous waste collection point.

Completely empty paint buckets and cans may be disposed of through the yellow bag. Dried up leftovers can also be disposed of via normal household waste, they belong in the residual waste.

Be more mindful – for the sake of the environment

There are numerous other problem materials whose disposal requires special attention. When in doubt, always look at the packaging instructions or call your local recycling center to ask about it.

Often the exact effects of incorrectly disposed of problematic materials on the environment and people cannot be estimated in advance.

Especially the impact of drug residues in the waters on the environment and also on humans is not yet well researched.

For many disposal problems there is also no optimal solution yet, but it is everyone’s duty to do their utmost not to pollute the environment more than absolutely necessary.

Especially when it comes to waste disposal, you can already achieve a lot with small steps. Just taking the first step toward conscious waste management is something everyone has to do for themselves.

You may have missed

Beet and its healing properties in many areas

Gran Canaria, health refueling with the best climate and much more!